There is toffee apple all over your face

Thanks Peter Combe for my childhood.

Thanks Brothers Toffee Apple Cider for my adulthood and mild alcoholism.

Is it creepy that a few sips in I was already watching this?

The magic smell when popping the top was a flashback to:

This is not lolly-water for kids fellow cider drinkers, don’t compare this bad boy to a dirty smirnoff on the train into the city before a big night of mingin‘.

When you take that first swig, you get that fresh cider taste, then a surge of toffee and that is where the acid flashbacks begin.
Its like eating a toffee apple in reverse. Then the after taste is back to the crispness of the apple, like when you have chewed all the toffee away and you are left with a boring old apple. 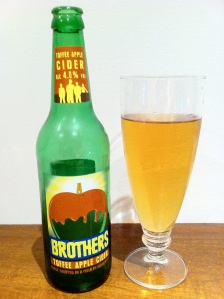 Toffee apple, nice and licky, one for Judy, one for Nicky

Fuck cake when you can have Toffee Apple cider for dessert.
Available at Duncan’s on Church st in Richmond. Where they have truly impressive selection of ciders.

I like cider. END_OF_DOCUMENT_TOKEN_TO_BE_REPLACED
This entry was posted on Friday, April 22nd, 2011 at 8:27 pm and posted in Uncategorized. You can follow any responses to this entry through the RSS 2.0 feed.
« The Benchmark: BRESS Brut
A morning shopping. »